everyone does it wrong

Some thoughts about error handling have been running around my head for a while, sometimes leaking out in code reviews or internet discussions, so maybe it's about time I got them down in semi-coherent form. I don't think error handling is something that most programmers learn early enough in their careers. After all, it really doesn't matter if the code you write for class assignment handles all possible error conditions properly. In fact, littering the code with error handling kind of gets in the way of whatever the purpose of that particular exercise was. Sure, some graders will demand a kind of rote, performative error handling, but very few will actually demand that code run in an environment where errors (not counting malformed input) are actively injected to prove that the error handling is sufficient. Far more expect assignments to be written in a style (e.g. functional) that leaves out error handling entirely. So people come out of school with bad habits.

Out in the real world, by contrast, proper error handling is absolutely essential and often has more code devoted to it than to the "happy path" without errors. Sure, sometimes you can get away with not checking some errors. If an uncaught error causes an interactive script to fail, but it's a rare case and the script can easily/safely be re-run, maybe it's not worth jumping through any hoops. At hyperscale, it might even be OK if a rare error takes out a task occasionally, so long as it really is rare and restarting the task is not an issue. In some ways it might be better to have the task fail, if that makes the error more visible than a log entry would. But in general, it's better to handle errors than let them stop your program.

That idea can be extended. My opinion about different error-handling strategies is that it's not acceptable to just drop an error on the floor silently. That includes the case where errors are made invisible, as we'll get to in the discussion of particular techniques. If it's not handled, an error should be explicitly cleared or passed on. (In fact, I think it would be valid to say that handling an error must include explicit clearance so it's not a separate case at all.) Think of an error as a little "poison pill" that can not pass a function/method boundary without being "detoxified" first. An example of a similar approach is a "signaling NaN" in IEEE floating-point math. It's an explicitly invalid value - uninitialized, overflow/underflow, division by zero. Any attempt to use it in a subsequent calculation will generate an exception, unless it's explicitly converted to a "quiet NaN" first. This is a good model, except that it takes effect at run time instead of compile time.

With all that as background, let's look at some of the common approaches to error handling.

It would seem that optional types are the clear winner here, so why am I still writing? Because they're still ... well, optional. Even if the language supports them, programmers don't have to use them. I'll illustrate this point with a picture. 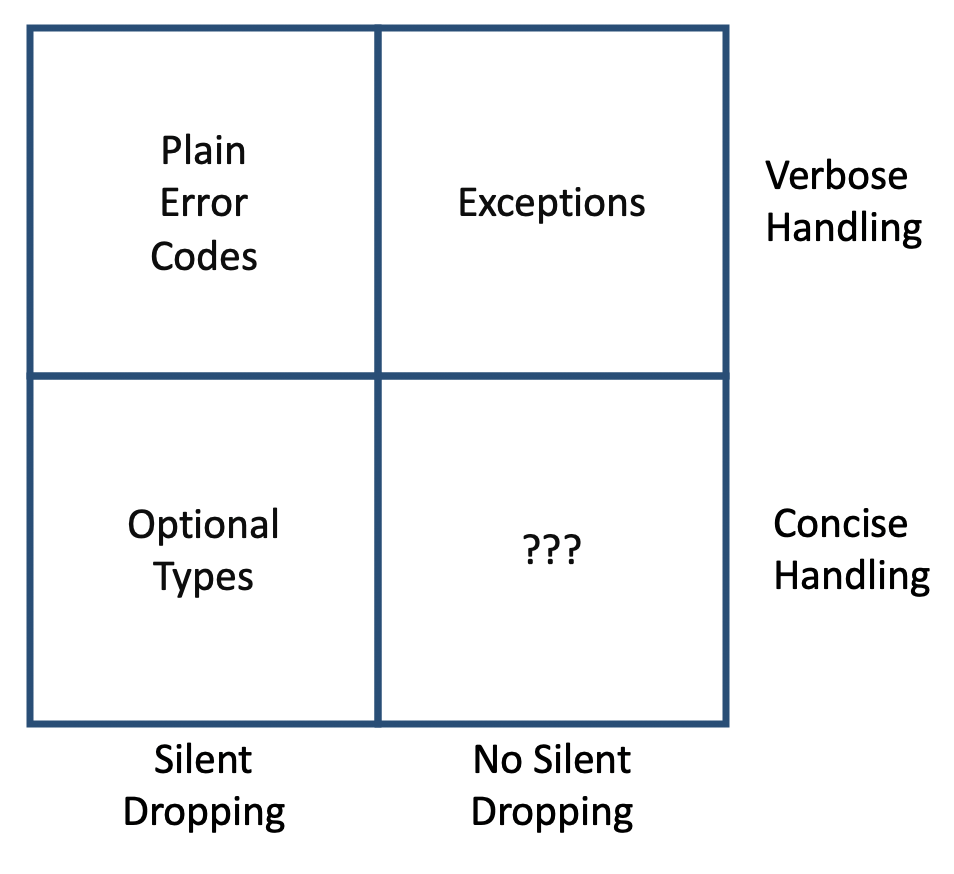 The easiest way to get into that last/best corner is to start with optional types and make them the default. In other words, a function by default returns a {normal_value, error} union unless explicitly tagged as pure (in which case it's a compile error for it to construct and return an error value, or pass one on without unwrapping it).  That alone is not sufficient, though. Consider the following function.

So yes, we did check for an error before calling do_second_part, but if do_first_part did return an error we're dropping it on the floor. Remember what I said about poison pills? We can't let them go out of scope without "detoxifying" them. By contrast, this would be OK.

In this case, we are handling the error if there is one. With the extra syntactic sugar, we can also make the non-error case very concise. But what if our error response is something other than to pass the error on? For example, we might try a different method, or a different server if what we're writing is some kind of network client. So try this on for size.

Here, clear is a new keyword to do that detoxification so that the compiler doesn't yell at us when x goes out of scope. If we really wanted to, we could make this more concise with some extra syntax.

Alternatively, we could discriminate among error types and return some immediately instead of clearing and trying an alternative method. I'll leave that as an exercise for the reader. The important thing is that we've followed our rule of never silently dropping an error on the floor, while making it as painless as possible to Do The Right Thing instead. Combine this with a defer/finally kind of construct to do cleanup when errors are returned (either explicitly or semi-explicitly via try) and I think it's about as good as real-world programming can get.

The existing language that comes closest to this ideal is Zig, which is why I've borrowed some of their catch/try syntax. However, I think their use of "!" in function definitions is the inverse of what I would have chosen. They use it to mean the function does return an error union instead of a plain type, whereas I would assume functions return error unions and use "!" to mean they do not. (NB "?" still makes sense for types IMO because they're still assumed to be plain.) Also, they don't treat "silent dropping" as a compile error and thus there's no explicit clear to indicate that the dropping is deliberate.

If I ever do implement my own programming language (most likely to facilitate easier distributed programming) this is the error model I'd start with. Maybe the syntax would end up being very different but, after 30+ years of cleaning up other people's messes because they lack the self-discipline to do the right thing when languages make that harder than necessary, I'd like to try writing code in a language that treats error handling as a first-class concern and encourages correct programming.