North Lexington is a challenging place to run. When I lived on the south side, I could turn just about any run into a loop pretty easily, even for short runs. On this side, that's often not possible because of all the obstacles. Chief among these is I-95; if you cross that, you're either coming back the same way or you're doing five-plus miles. To make that even more fun, the crossings tend to be at hills like Mass Ave to the west or Grove St to the north. Speaking of hills, they get in the way too. Good luck going over Meriam Hill without hitting a 10% grade somewhere, and Glen St is 18% at the bottom if you're really looking for a challenge. I think this is part of why the Diamond cross-country team are perennial state champions. I see them often on North St, and sometimes right outside my house since I'm near the top of Manor Hill (which I'd call Preston Hill but nobody asked me). Then there are roads that run parallel with few routes between them, the Minuteman bikeway being too crowded during a pandemic, and so on.

Without further ado, then, here are some of the routes I use to get around all this complexity. 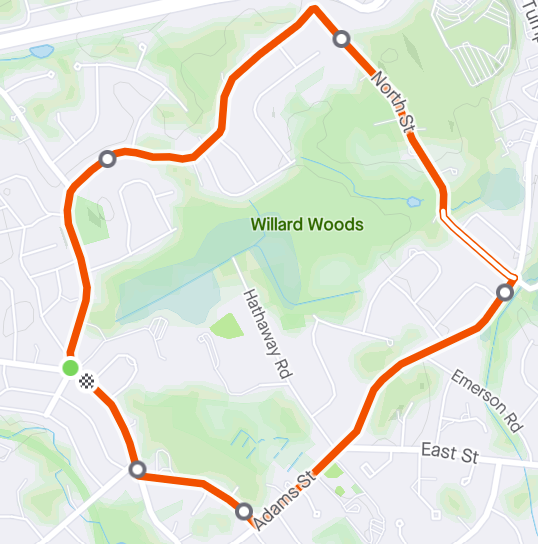 This is the one I do when I can't think of anything else, for just over 5K. From the Diamond rotary: north on Burlington, east at the Grove fork, right onto North St, right onto Adams, cut over on Coolidge, final right back onto Hancock. The nice thing about this route is that it's really about twenty routes. If you add all the "extras" you can stretch it into almost five miles with lots of hills. If you use all of the cut-throughs it can be a flat two miles. Here's one of the longer forms. 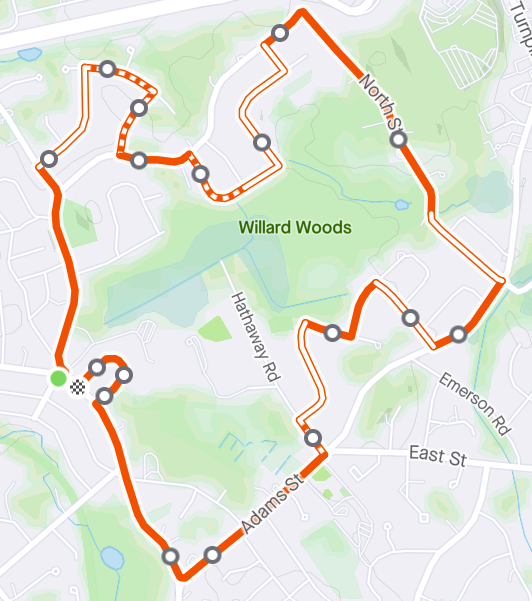 That's a lot, so here are some notes basically following the route. 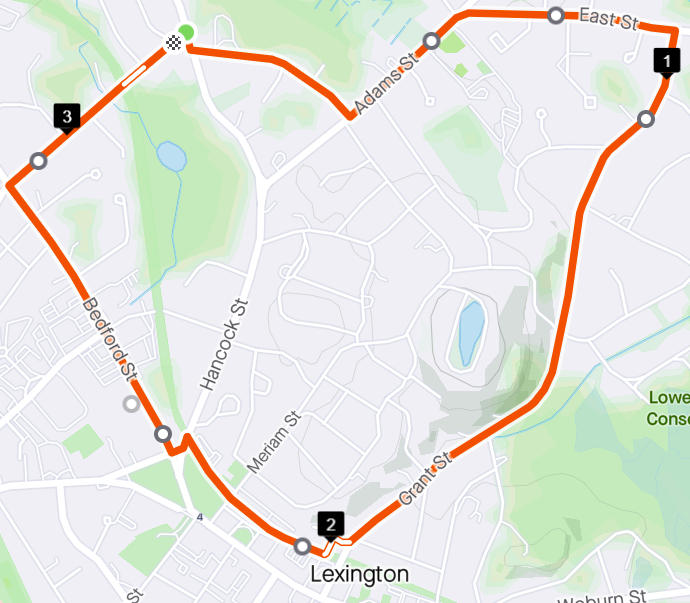 This map picks up just south of the previous ones, at the Hancock/Adams/Coolidge junction. Just like we went around Willard Woods before, this time we'll go around Meriam Hill for about the same 5K distance. Another key feature is avoiding Lexington Center. I don't like dodging around lots of pedestrians on the sidewalk. I like dodging around both parked and moving cars even less. Therefore, Mass Ave from Woburn St up to the Green is dead to me. In normal times, this isn't a big deal because I can just use the parallel part of the Minuteman bikeway instead. Unfortunately, this is the most crowded part of the bikeway in Lexington - often more crowded than the sidewalks in summer. I traverse it exactly twice each month because I've been doing segments in each direction every single month for seven years (even in winter) and I don't want to break my streak, but even then I try to do minimal sections during low-traffic periods until this pandemic is well and truly over. Notes again, following the route: 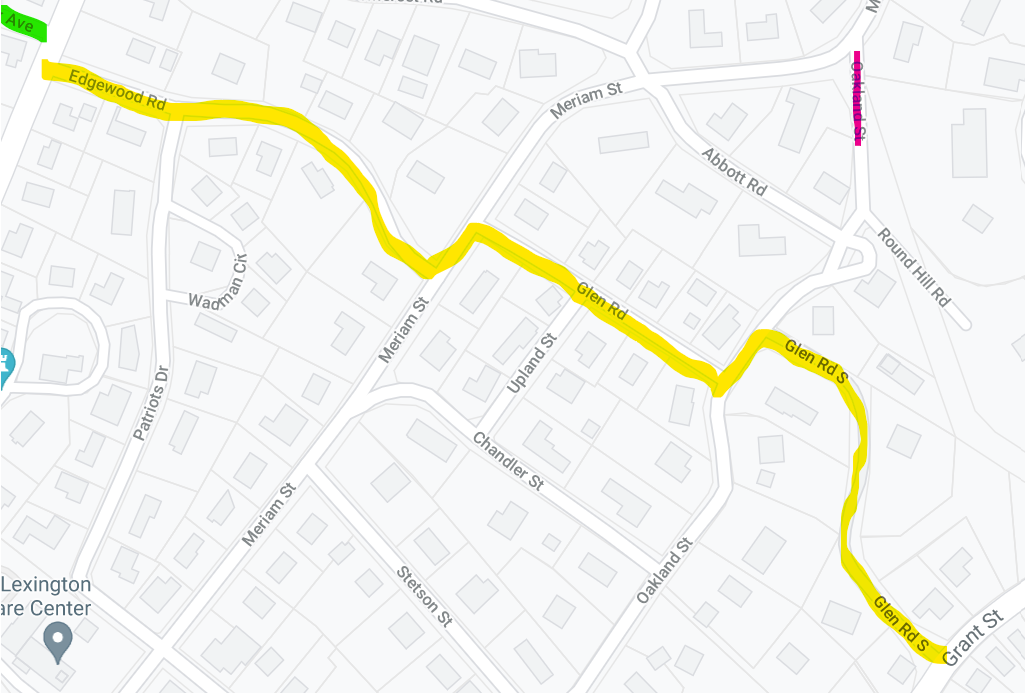 The yellow line is the Glen Rd zig-zag from Grant to Hancock. The pink line at the upper right is the little hidden dell. Note that it's a pretty good uphill north on Meriam from there to Adams, or you can turn south and rejoin the yellow line. At the top left, where "Ave" is highlighted in green, is Hancock Ave. That's a very useful little shortcut - one block, across the bike path, behind the fire station, back to Bedford St. It's a great thing to know for other routes that also use Hancock one way and Bedford the other. 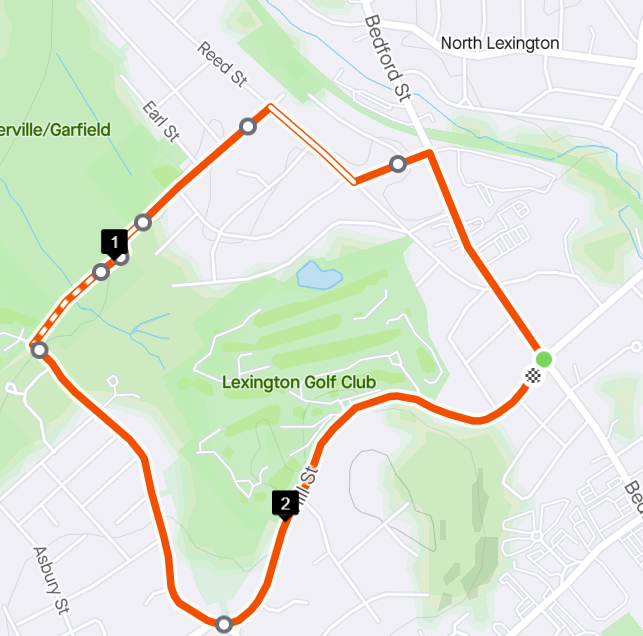 Now we're starting with our far-right corner where the far-left corner of the previous route was, at Bedford and Revere/Hill, for about 8km or 2.5 miles. Partly I wanted to include this because that first part of Bedford St is one of my absolute favorites - a steady gentle downhill, with a nice wide bike lane if I need to avoid pedestrians on the sidewalk. This is where I set a lot of my 1km best times now. Notes:

You might be getting the impression that I hate the Minuteman bikeway. I really don't. In fact I like it quite a lot; I was thrilled when we moved to this part of town and I saw that I'd be able to use it more. What I don't like is the crowds, so I try to use it sparingly and only during low-traffic times. My favorite is a light morning drizzle, which keeps just about everyone else - especially cyclists - off it but I don't mind at all.

From this part of town, it's very easy to build a 5K going west on the bike path. For me that's out to Hartwell, but your (literal) mileage may vary. I can also go all the way out to the Bedford depot for a very nice 10K - flat, mostly straight, easy to follow. But this map will show a couple of more interesting tricks. 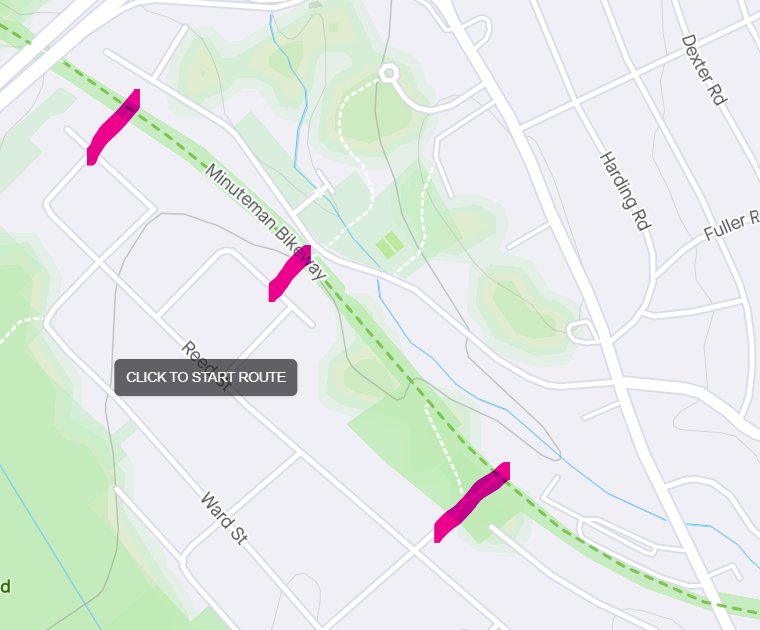 That's Bedford St at bottom right, I-95 at top left. Notice the three pink highlights? Those are all cutovers from the bike path to the Reed section of town. As much fun as running up and down Bedford St might be, having these available makes a huge difference in opening up that section of town. For those of us further north and east, it adds a ton of options for adding just a bit more distance and variety.

I don't think I've used the easternmost one (Garfield) at all, and I've only used the westernmost one (Avon) a few times. But the one in between (Laurel/Essex) I use a lot. Besides providing access to the Reed area on one side, it also provides access to Valley St on the other. (Warning: Valley runs pretty steeply downhill from east to west.) There's also a path even further north to the circle at Cider Mill. If your way out/home lies more on Simonds or Williams than Hancock or Ledgelawn, that might be handy.

Don't worry, Estabrook folks. I haven't forgotten that you're part of Lexington too. 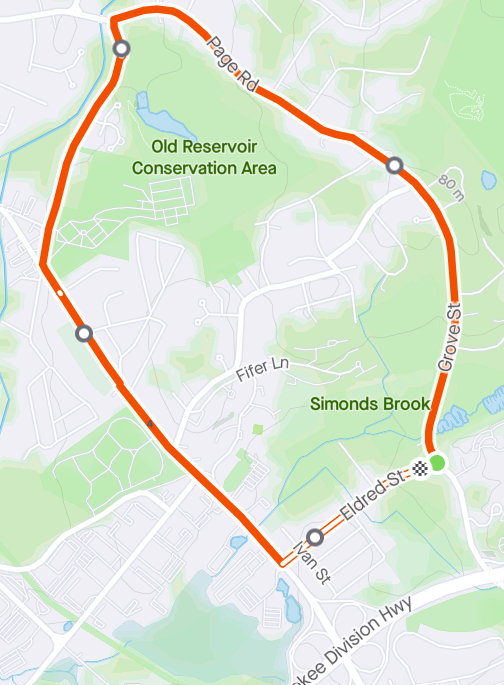 This is just a bit north of everything else so far - Bedford St I-95 interchange at the bottom, with Wyman and Williams forming the bottom of Manor Hill in the corner. Up at the top you'd hit Route 62 if you didn't turn south onto Shawsheen toward the cemetery - and the Citgo, and the McDonalds, and Bedford House of Beef (try the gyros), etc. This route is about 3.6 miles as shown, but that's only because I left out the "approach" from my house. Remember what I said earlier about having to come back the same way if you cross I-95? This is an example. You really don't want to cross I-95 on Bedford St, so Eldred is the absolute key here. It brings you back to that join point, then you can retrace your steps to wherever you started.

So, that stretch of Grove St from I-95/Robinson up to Volunteer Way or Carriage Drive? It's a bit of a beast. Much of it is 5% grade or worse, and it's pretty steady but it just keeps going. There's a solid argument for doing this route the other way around, especially since Eldred also runs uphill from west to east at the end, but this is the way I usually do it and the reason is our last map. 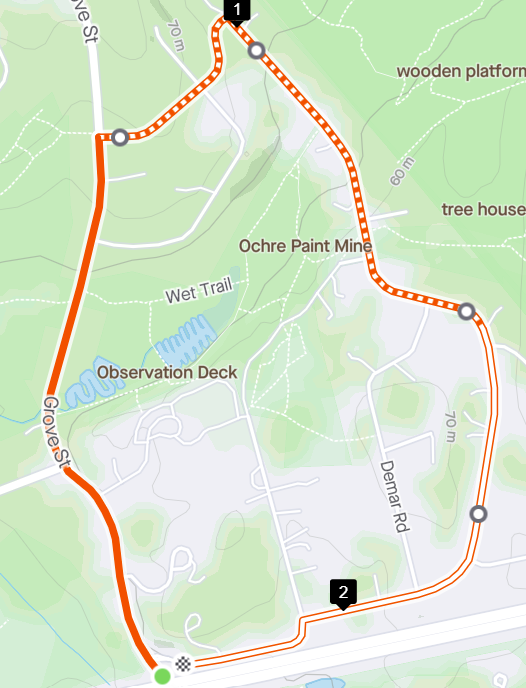 This is how you bail out if you're utterly sick of Grove St before you get to the top. You turn right on Gould (or Dewey), then onto Turning Mill around the east side. That dumps you straight onto Robinson Rd (parallel to I-95) and back to Grove - much lower down. Partridge Rd at the southeast corner might seem tempting, but it does add a bit more uphill.

You might also notice some strange words like "wooden platform" and "tree house" at the top right, and "wet trail" in the middle. Those are the Burlington Landlocked Forest and the Paint Rock pool area respectively. They're just far enough that I haven't explored them yet, but some friends who grew up in that part of town have mentioned them fondly. Maybe this fall I'll map them out.

There are - of course! - many other routes I've left out. I haven't covered the things actually on Manor Hill, or south to Ledgelawn, because they don't have a lot of "hidden secrets" you wouldn't see on a map. (OK, yeah, there's a cool little cut-through from the north end of Blake to Williams.) I didn't cover the far-east route on Muller and Wheeler. I didn't cover the far-west route along Hartwell and Wood St. I could write a whole article just as long as this one about the south side of town where I lived for almost twenty years. But this should give you a good starting set of ideas to get around the disconnected and hilly mess that is north Lexington. Enjoy!

Posted in: recreationrunningtips and tricks