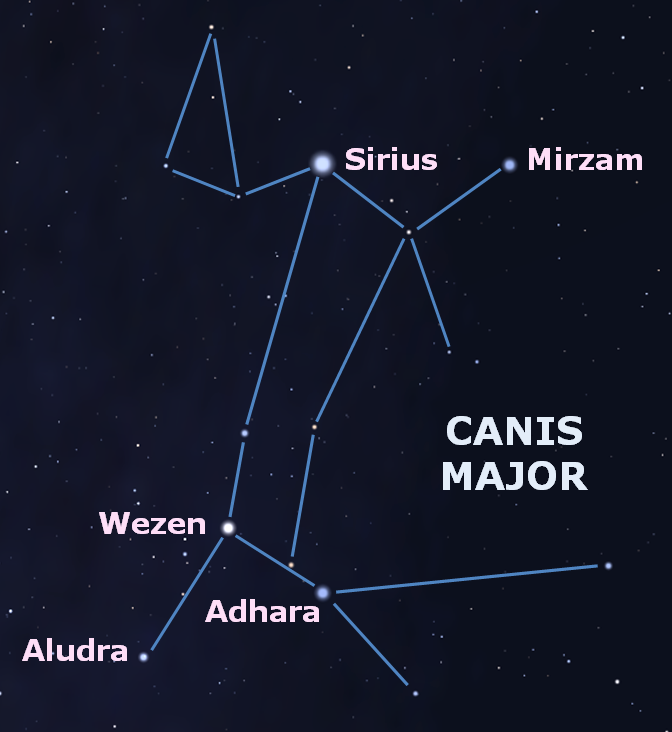 As you can see, that is Canis Major (Big Dog). It's best known for including Sirius, the brightest star in our night sky, but I want you to focus on the two named stars that seem closest - Adhara and Wezen. As it turns out, they're not closest at all. Adhara is actually 4x closer to Sirius, and even more importantly to us, than it is to Wezen. It's closer still to Mirzam, by far. Why do the apparent and actual distances seem so different? Parallax. Adhara and Wezen only seem close because of where we're looking from. The human brain mistakes same direction for same location. It's the same principle used in some kinds of art to fool the eye. It also affects us in more tangible ways. For example, parallax error can cause drivers to misinterpret the approach speed of another vehicle at an intersection, or fail to see a bike entirely because it stays in the driver's blind spot.

Parallax error also rears its head in politics. To those at either far end of the left/right spectrum, anyone even slightly closer to the center is in the same direction and therefore often (mis)perceived as being the same. Even somebody in the absolute political center - wherever that is - looks like a communist to Donald Trump fan. That same person looks like a plutocrat or fascist to a Bernie Sanders fan. I had been well aware of this phenomenon for a long time, but I didn't realize how common it is among younger leftists until I started using Tumblr. *BTW I won't call them "progressives" because actual progress seems like the furthest thing from their minds. I'm a progressive. They're not.) I know it's partly a function of who I follow - because I'm far from a political centrist myself - but my timeline there is full of memes trashing Biden, claiming both parties are the same, and suggesting that voting for either is wrong. Here's a typical example. 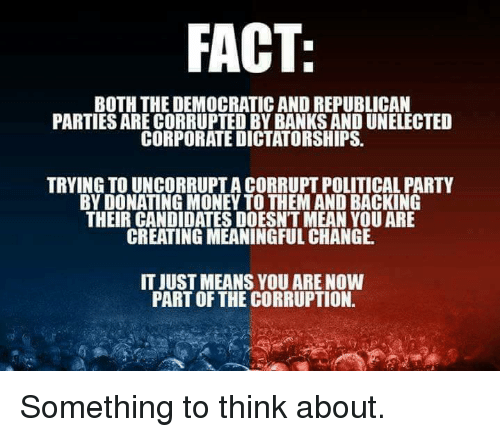 Are the Democrats too beholden to corporate interests? Yes. Are they guilty of their own crimes against liberty, or against other countries' sovereignty? Yes again. But that doesn't mean they're the same as Republicans. Not even on economic issues like taxes and regulation. Nobody likes regulation for its own sake, it's not sexy, but it's how we ensure things like worker and product safety, clean air and water, etc. It's how we used to prevent (some) abuses of position in both politics and finance. Individual action can't address harms that are diffuse or hard to prove but nonetheless real, such as pollution. And then we move on to issues beyond economic.

No, they're not the same. Not at all. They only appear that way when you're looking at them from another galaxy. Now, as Biden is fond of saying, here's the thing.

Your socialist utopia is not going to happen in the US.

I'm not saying it's a bad goal. I'm just barely short of being a socialist myself, more of a social democrat in the Europe ~2000 mold. I find modern socialism respectable, even if I haven't adopted it myself. But it's not going to happen in the US. Not when 47% of the votes for president in the last election were not only for somebody on the other side of the spectrum but for somebody on the far end of that spectrum and a monumental jackass to boot. Things were even worse in the US House, worse still at the state level, plus gerrymandering, plus courts at all levels packed with Federalist appointees, etc. Getting people to accept socialist ideas enough to act on them will take decades of hard educational/advocacy work. Giving in to despair, encouraging people to "opt out" of the current system (as though they can), only makes it less likely that any of that will happen ... and I think that's actually what many of the people putting out these memes really want. Why sully a pure and perfect vision by contact with reality? Why let your edgy/contrarian beliefs, the cornerstone of your public identity, become mainstream? Grow the hell up.

Stop making the perfect the enemy of the good. Especially the only-imagined perfect. I wanted Warren to be president - not Bernie but not Biden either. I had to hold my nose a bit when I actually voted, but the choice was still crystal clear. Contrary to what the image above says, in the here and now and the foreseeable future, anyone who uses "they're the same" as an excuse not to support Democrats - and I mean tangibly support, not just internet slacktivism - is both incorrect and a moron. Such people are very much part of the problem, not part of the solution.