But the tests we already have already waste my time waiting for them and debugging spurious failures and re-submitting my changes!

That's probably all true, I've felt that pain myself on many projects through the years, but it's still not going to stop me. To explain why, let's start with a diagram. 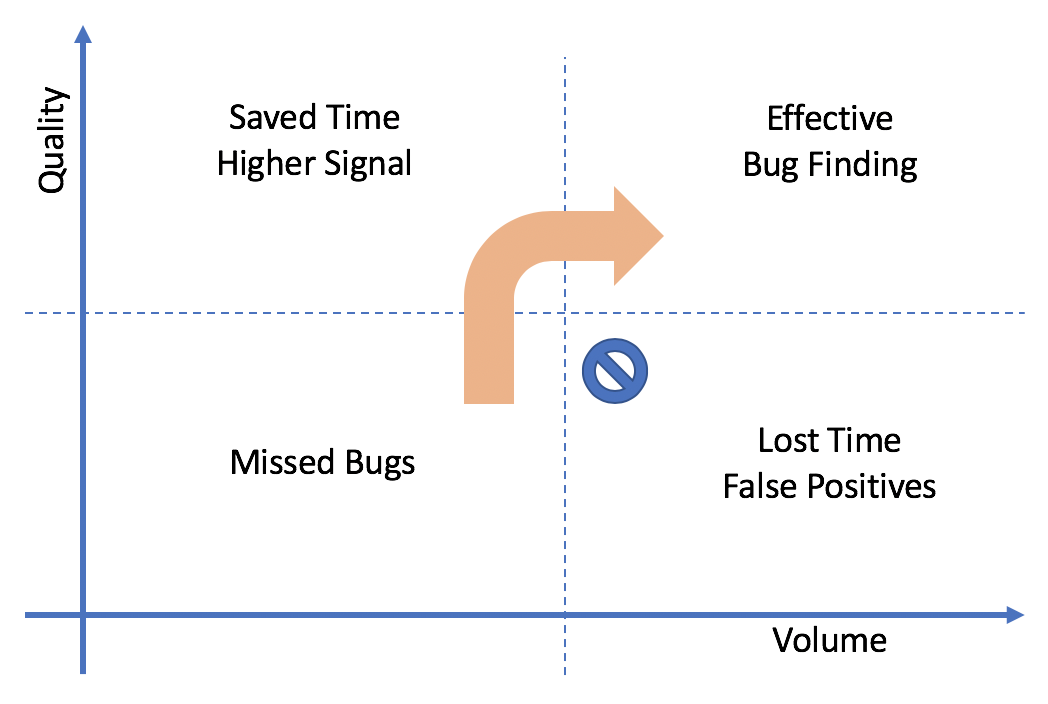 This diagram (I hope) illustrates many things. First, let's look at the lower right. This is what makes people afraid of spending time on tests, and justifiably so if they've never worked with a good test environment. Just adding more tests makes things worse if you're still below the quality mid-point. Unfortunately, this is quite often exactly what project managers and others promote as the antidote to poor quality, because it's easy to measure. It's misguided. As a developer, I hate waiting for tests. I hate debugging tests that often fail for no reason, or because they were testing implementation details and broke as a result of a perfectly valid change. Most of all, I hate spending time creating a complex mock environment that by its very nature avoids the places where real bugs live. That's all garbage. It's nothing I'd ever advocate.

What I do advocate is moving up first. Hence the orange arrow. Good tests are:

It's OK to have relatively few tests initially that meet these standards. Better to stay in the lower left quadrant than move to the lower right. Once the infrastructure and culture for good testing exist, once people are comfortable writing high-quality tests and trust those to do what tests should do, then it's time to start making them more comprehensive. Developing a strong test suite requires high skill and often takes years, but it ultimately pays for itself in increased development velocity. It's easier to "be bold" and "move fast" when you don't have to spend half your time chasing "spooky behavior" in production (or even full-scale system tests). Maybe finding those same problems via targeted, deterministic, quick-to-run tests earlier in the development process doesn't feel as heroic, but when it comes to running a business I'll choose diligence over heroism every time.